When retirement looks like task after task, finding the right equipment could turn a work in progress into a completed project.

Retirement looks different for everyone. Some travel, or move to a quieter part of town, pick up new hobbies, spend more time with family. Others take the time to travel, maybe go on a cruise or two and wear the stereotypical Hawaiian button up shirts and khaki shorts. Then, some retirees use their newly obtained free time to take on projects that they otherwise didn’t have time for, repaint the house, redo the front yard. For Michael Henn, retirement looks like the latter rather than the former. When his wife bought a 51 acre farm to have enough room for their horses to run around, he was put to work with several projects on their land.

One of the projects happened to be using their backhoe to dig trenches on their farm. But, with creating trenches comes the rocks buried in the dirt. Michael initially used a backhoe to organize the accumulating pile of rocks, but soon realized it wasn’t so much a solution, as much as it was a temporary fix. No matter how he stored the rocks, the pile continued to grow. 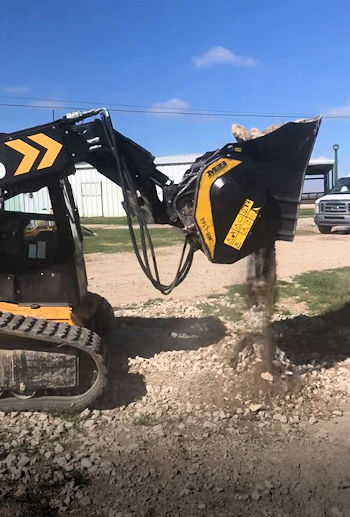 Their solution, happened to be one that his wife found online: one of MB’s crusher buckets, specifically, the MB-L160. And while most would have been hesitant at buying a new piece of equipment, Michael agreed because it let him buy a skid steer compatible with the rock crusher they purchased. Now, he has not one, but two new pieces of equipment to use around the farm.

Despite his initial concerns, primarily with how the MB-L160 crusher bucket will be able to process rocks, once he got the chance to have the crusher on his farm and used the crusher for the first time, he saw how it worked and was impressed with the results. Michael went to work, taking the rocks he obtained from digging the trenches and creating aggregates. Now, instead of letting rocks pile up on their farm, they crush their materials in two steps: the first step is crushing the large rocks down to a 3 inch minus, then adding the shims and further crushing them down to ½ an inch.

With his newly created aggregates, Michael then used it for other projects around the farm such as creating backfill for those trenches, and more recently, using them to create their driveway. However, with so many projects on the farm, he finds himself not using the unit as often as he’d like. But on the days he does have time to use it, he makes about 10/15 yards in two days. 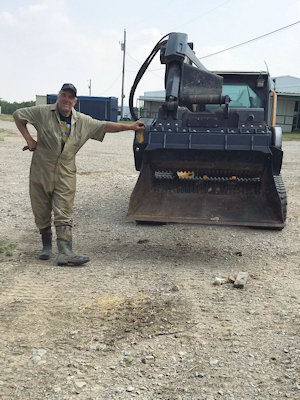 He’s stated that he likes using the crusher a lot more to crush rocks over crushing concrete, since rocks tend to lay flatter on the ground, making it perfect for their driveway. Michael also let us know that he has started saving money and time by using the crusher. However, despite him loving the crusher and getting the chance to play with it, he does wish he had more time to use the crusher, since he’s constantly switching between tasks.

Despite work on the farm being a work in progress, there’s one thing that Michael doesn’t have to worry about as he changes from project to project: what he’ll do with the rocks on his farm. Now, when the pile of rocks starts to accumulate or when he needs to return to fill the trenches of fixing the driveway: the MB-L160 rock crusher. All Michael needs to do create aggregates is use his crusher to scoop up the rocks and process the material down to the output size he needs for that project.